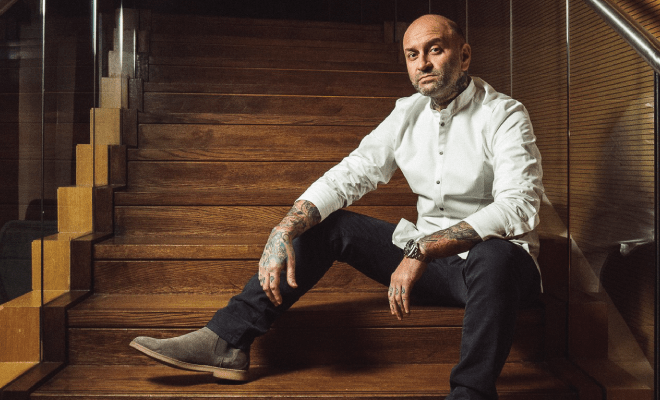 Greek Superchef Dimitris Katrivesis to join Nostimo Chef-in-Residence, David Tsirekas for an exciting week of flavour in May, including Brisbane’s first ever Greek Yum Cha experience

His cooking has been described as ‘daring, self-assured and full of expression’, a chef who makes ‘harmonious and refined dishes, not just ones with intensity and macho charm’ and this May, Brisbane will experience the famed flavours of Greek superchef Chef Dimitris Katrivesis firsthand when he takes up residence at Nostimo Restaurant & Bar ahead of the Paniyiri Greek Festival.

Chef Dimitris Katrivesis is famed globally as a master of Greek cuisine, both traditional and modern, and his CV includes some of the world’s very best restaurants. After studying culinary arts in Athens in 1996, his passion for global flavours and learning has taken him from five-time world number one restaurant, the three-Michelin starred El Bulli in Spain, to Luxembourg, Paris and Tokyo where he worked at the acclaimed three-Michelin starred restaurant Ryugin.

He returned to Greece and used his unmatched international experience to create the unique concept JSP, a blend of Japanese/Spanish/Peruvian flavours mixed with his Greek influences. He’s the author of “The Real Deal”, a book on Peruvian street food and is currently based in Athens, where he leads the famed Fuga Restaurant set in the gardens of the magnificent Athens Concert Hall. It is at Fuga that he perfected Greek Yum Cha, a concept he and Chef Tsirekas will bring to Nostimo Restaurant for the Paniyiri weekend!

Chef Katrivesis was convinced to visit Brisbane by his friend, Chef Tsirekas, himself famed for changing the approach to Greek cuisine here in Australia and internationally (of course Chef Tsirekas heads up Sydney’s acclaimed 1821 and was also poached  by mega restaurateur Louie Alexakis two years ago to oversee the opening of two Greek restaurants in Chicago).

While Chef Katrivesis’s visit to Brisbane is for just over one week, in the sharing spirit so famous in Greece, there are plenty of opportunities for food lovers to taste his fare and meet The Man!

May 12 and 13: An introduction to South East Queensland produce!

On arrival in Brisbane, Chef Katrivesis will be taken straight to meet South East Queensland’s wonderful local producers, hosted by Chef Tsirekas. Both Chefs were brought up to champion local flavours and they will visit the Schultz Farm near Toowoomba and be introduced to the very best local seafood with famed fisherman Chris Bolton.

With Chef Katrivesis in residence, he will work with local South East Queensland produce creating daily lunch and dinner specials showcasing his  famous style, as well as mentoring the kitchen team at Nostimo. To make a reservation, call 07 3844 1166 or email dine@nostimorestaurant.com.au

In a culinary event not to be missed, Chefs Tsirekas and Chef Katrivesis will host a Signature Degustation Dinner in Nostimo Restaurant with the menu designed by Chef Katrivesis & MC’d by Chef Tsirekas. Tickets are $120 per person for the menu only, matched wines optional – to book visit Eventbrite or call 07 3844 1166.

Over the famous Paniyiri Greek Festival weekend, Nostimo Restaurant will be transformed into Brisbane’s first ever Greek Yum-Cha … introducing the Meze Karotsi/Greek Trolley, a style Chef Katrivesis has made famous throughout the world! Diners can enjoy unique Greek meze plates in traditional Yum-Cha fashion, and to add to the authenticity of the event each guest will receive faux Greek currency to use!  See paniyiri.com.au

Saturday and Sunday, May 18 and 19: Paniyiri Geek Festival Cooking Demonstrations

Both Chef Tsirekas and Chef Katrivesis will star in hugely popular Cooking Demonstration Program over the two days of Paniyiri, held upstairs at The Greek Club. For detail see Paniyiri.com.au