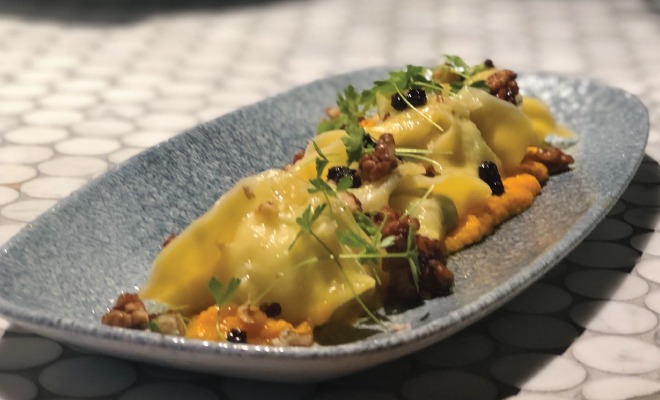 Pioneers of Contemporary Greek in Brisbane

It certainly is an exciting time for Greek cuisine in Australia, with modern Greek fare having its time in the spotlight. We love this article in Neos Kosmos highlighting how a new generation of creative cooks are spearheading the modernisation of the Greek food scene in Melbourne.

Likewise, Brisbane is undergoing a Greek food revolution. We are so proud to be pioneering this shift in modern Greek cuisine here in Brisbane at Nostimo. Our internationally acclaimed Chef In Residence, David Tsirekas, has created for Nostimo a Greek menu like no other, bringing his unique flair to traditional dishes we know and love.

General Manager of Nostimo and The Greek Club, Andrew Tambakis, said David’s work with Nostimo has been pivotal to the shift in Greek cuisine in Brisbane.

“It is his commitment to celebrating local produce and his experience in understanding the history of Greek cuisine, together with his vision for shaking up Brisbane’s Hellenic dining culinary scene that makes him such a wonderful leader for Nostimo Bar Restaurant,” says Mr. Tambakis.

The Neos Kosmos article notes Australia’s unique position to foster these changes, quoting Professor Rachel Ankeny, leader of the food values research group at The University of Adelaide – “Australia is blessed with many diverse cuisines due to its multicultural history, but those cuisines are constantly in evolution and often become hybridised with each other and with local practices due to the influences of climate, available products, and consumer demand”.

David Tsirekas champions this belief, celebrating fresh local produce in all of his modern Greek creations.

“My dishes focus on tradition while still being contemporary and fun, and hero everything that is celebrated about Greek cuisine: produce, quality, seasonality and freshness,” says David.

Among David’s dishes on the Nostimo menu, is the famous Pork Belly Baklava. Representing a merging of savoury and sweet with the layering of meat and fat echoing pastry and nuts in the traditional baklava incarnation. The new summer menu introduces a new flavour fusion in David’s Prawn Manti dish – Greek style dumplings with prawn filling served with carrot puree, candied walnuts and a burnt butter currant dressing.

Another of David’s new dishes, the Kingfish Tartare, represents a rehashing of classical ancient ideals of Hellenic cuisine, celebrating beautifully fresh raw kingfish prepared with traditional flavours of Greek basis, ouzo and lemon, yet presented with a new-age elegance.

Experience the venue at forefront of contemporary Greek cuisine in Brisbane. Book your table here or call our friendly team on 3844 1166.